Showing posts from June, 2015
Show all

Jupiter and Venus will merge into a dazzling ”super-star” in the Western horizon by the end of June, NASA says. The conjunction of the two planets has been building during the month of June and will culminate in a spectacular display on June 30. “Every night in June, the separation between Venus and Jupiter will visibly shrink,” says NASA. A conjunction is when two or more objects appear very close together on the sky. Read More 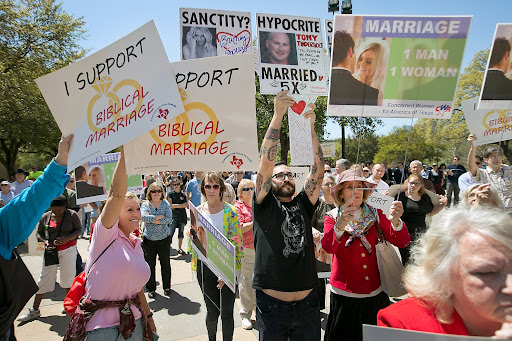 Texas Attorney General Ken Paxton (R) is telling county officials in that state that they can deny marriage licenses to same-sex couples if they have religious objections to doing so.

"Friday, the United States Supreme Court again ignored the text and spirit of the Constitution to manufacture a right that simply does not exist," he wrote in a statement. Several times, Paxton referred to the decision as "lawless," but the core of his argument was this: If a clerk (or judge or justice or employees thereof) has a religious objection to issuing a license to a same-sex marriage, he or she can decide not to do so. 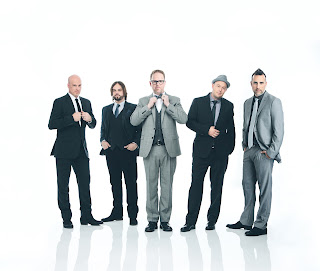 Thai authorities have forced a human rights group to cancel the launch of its report on the Vietnamese government's persecution of an ethnic minority.

The 33-page report by Human Rights Watch describes persecution of Montagnard Christians in Vietnam's Central Highlands, whose religious practices have been described by the government as "evil."

Thai police said in a statement Friday the scheduled event at the Foreign Correspondents Club of Thailand could impact national security or the relations between Thailand and Vietnam. 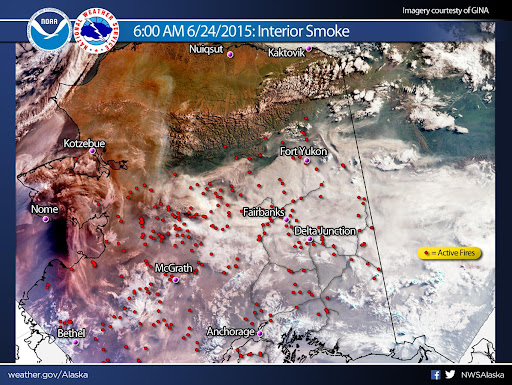 Alaska is on fire. Smoke as seen from VIIRS this morning. More than 200 active fires are burning.

27 images that show we are in danger

27 images that prove that we are in danger. #7 left my mouth open

US Supreme Court denies Jerusalem as capital of Israel

The US Supreme Court has ruled to deny Jerusalem as part of Israel, Israel National News reported. The decision, announced Monday, overturns a 2002 law requiring the State Department to recognize “Jerusalem, Israel” as a birthplace in passport listings.

The case in question, Zivotofsky v. Kerry, has beenbouncing around the US court systemsince 2004. Menachem Binyamin Zivotofsky was born in Jerusalem to two American parents in 2002. In 2004, they sued to have their son’s birthplace changed from simply “Jerusalem” to “Jerusalem, Israel” in accordance with the law passed byCongressjust months before his birth. The matter came before theSupreme Court last year, after being rejected repeatedly by lower courts.
The Supreme Court ruled 6-3 against the Zivotofskys, criticizing Congress for “overstepping its bounds”, according to the National Journal. Read More 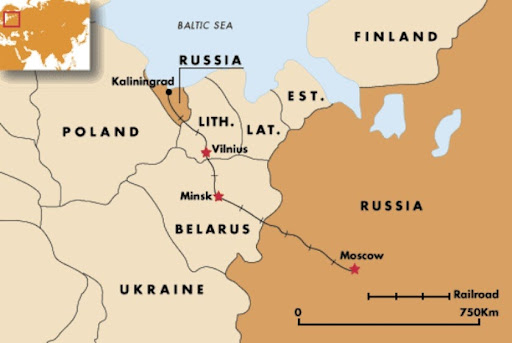 Russia is pouring troops and weapons -- including missiles capable of carrying nuclear warheads -- into its western exclave of Kaliningrad at such a rate that the region is now one of Europe's most militarized places.

A NATO official, writing to RFE/RL on condition of anonymity, said that Moscow is stationing "thousands of troops, including mechanized and naval infantry brigades, military aircraft, modern long-range air defense units and hundreds of armored vehicles in the territory."

The military activity in Kaliningrad, which has no land connection to Russia and which borders EU members Lithuania and Poland, has raised alarms in Vilnius and Warsaw that can be clearly heard in Brussels and Washington.

US Supreme Court rules in favor of church

The U.S. Supreme Court has unanimously ruled in favor of an Arizona church and against a local law that essentially forced churches to display their signs at night, while allowing other types of signs to be displayed 24/7.

As previously reported, in 2008, Good News Community Church of Gilbert filed a lawsuit in federal court seeking to obtain an injunction against the city’s sign ordinance, which prohibited entities from displaying temporary directional signs on the public ways more than 12 hours before services and more than 1 hour afterward.

The church had found itself in disputes with the city prior to filing the suit, as officials claimed that members were displaying too many signs and was leaving them up for too long. A directional sign is a sign with an arrow, pointing traffic to a particular event or location.

Expectation that gay marriage will be legalized 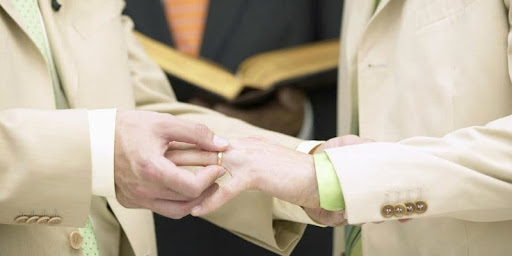 Most Americans — including people from every major religious group — predict gay marriage will be legalized nationwide when a hotly anticipated Supreme Court ruling is announced later this month.

Among those who favor legalizing same-sex marriage, 80 percent think the high court will rule their way, according to a survey by the Public Religion Research Institute released Thursday (June 11). And among those who oppose gay marriage, 47 percent say that’s the likely outcome, too. 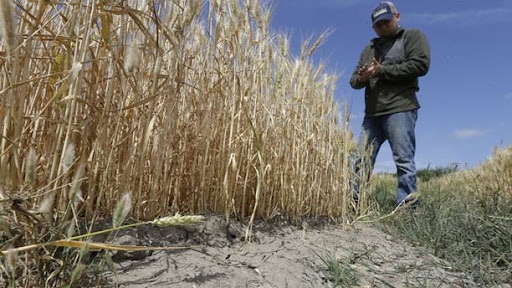 California regulators ordered farmers and others who hold some of the state’s strongest water rights Friday to stop pumping from 3 major waterways in one of the country’s prime farm regions.

The order involving record cuts by water rights holders in the Sacramento, San Joaquin and delta watersheds followed mandatory water curtailment earlier this year to cities and towns and to farmers with less iron-clad water rights. The targeted waterways provide water to farms and cities in the Central Valley and beyond. 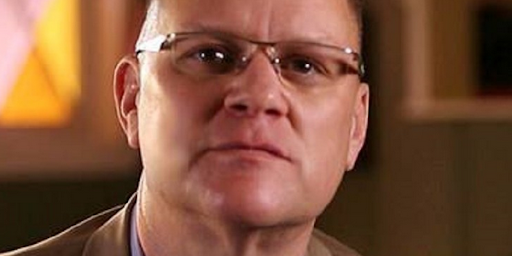 A Navy chaplain who came under fire from his commander for speaking of Christian biblical values on homosexuality and marriage – and who was ordered to stop counseling any sailors – has filed a formal complaint so he can resume dutiies Chaplain Wes Modder has been spending his days on duty outside his office, on a tight rein from his commanding officer, Capt. Jon Fahs, who has ordered he stop speaking to fellow Navy personnel. Fahs ordered the stand-down after several sailors complained of his shared Christian views of marriage, Breitbart reported.
Read more 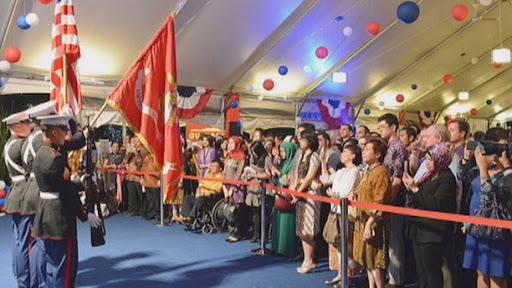 We are celebrating a month early to respect the holy month of Ramadan,” Ambassador Robert Blake told a gathering at the embassy. 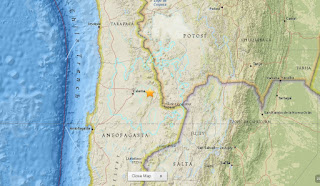 Miley Cyrus’ super revealing Paper magazine cover story, the actress, who appears nude inside the mag, says she is the least judgmental person ever, yet she has some harsh words for Christian fundamentalists and her parents.


The magazine’s story on Cyrus notes that though she was raised Christian, the singer “maintains a particular contempt for fundamentalist lawmakers who rally against this sort of progressive, potentially life-saving changes [for the LGBT] community.”

The pop star told the mag, "Those people [shouldn't] get to make our laws.”

The article touches on what Cyrus thinks of people who believe Noah’s Ark was a real vessel, "That's f--king insane,” she told the magazine. “We've outgrown that fairy tale, like we've outgrown f--king Santa and the tooth fairy."

Pope prays toward Mecca in mosque

Pope Francis entered the Blue Mosque in Istanbul Turkey, where he took off his shoes, and bowed toward Mecca and made his prayer, as he stood next to Istanbul’s Grand Mufti Rahmi Yaran. I did a whole video on this: 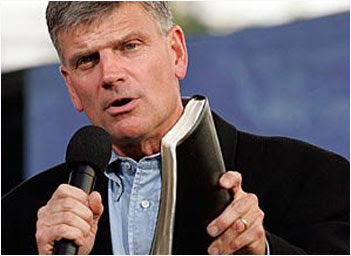 Franklin Graham is calling on Christians to boycott corporations that feature same-sex relationships in their commercials. And he says he’ll do his part by moving all the bank accounts for his two ministries out of Wells Fargo because of its ad featuring a lesbian couple.

“This is one way we as Christians can speak out – we have the power of choice,” Graham wrote on Facebook over the weekend. “Let’s just stop doing business with those who promote sin and stand against Almighty God’s laws and His standards. Maybe if enough of us do this, it will get their attention.”
Read more
Post a Comment
Read more

- June 09, 2015
A pastor became so incensed at Rev. Al Sharpton’s call for donations during a rally against community violence he shouted amid the event: How dare you ask for money at this rally? The rally was held in Hartford, Connecticut. And there, several speakers touched on the need to come together as a community and stand strong against the rising homicide rate – among them, Sharpton.
Read more 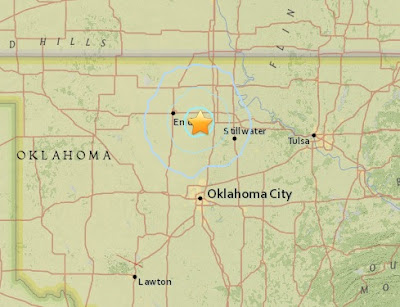 Most of North America east of the Rocky Mountains has infrequent earthquakes. Here and there earthquakes are more numerous, for example in the New Madrid seismic zone centered on southeastern Missouri, in the Charlevoix-Kamouraska seismic zone of eastern Quebec, in New England, in the New York - Philadelphia - Wilmington urban corridor, and elsewhere. However, most of the enormous region from the Rockies to the Atlantic can go years without an earthquake large enough to be felt, and several U.S. states have never reported a damaging earthquake. Read more at USGS.gov
Post a Comment
Read more