Police in the town of Sargodha in Pakistan have arrested and charged a Christian man, known for healing the sick, with allegedly committing the crime of blasphemy.

According to the British Pakistani Christian Association, Naveed John, a Christian resident from the Maryam Colony, was arrested on Oct. 8 and has been languishing in prison since his arrest.

The humanitarian agency's report states that John was arrested after police officers found a sword in his room that featured verses from the Quran inscribed into the blade. Family members told BPCA that police officials have demanded that they pay a bribe if they want John to be released. But because the family refused to pay the bribe, the police have now accused John of blasphemy and have also registered an investigation report against him.

The police report states that police found a sword in Naveed's room inscribed with Muslim proclamations. It further states that a Christian should not be in possession of the Muslim sword and that knowledge of the sword in a Christian's possession could stir Muslims to violence.

The sword has been described as a gift from a friend that Naveed kept simply to show courtesy and avoid offence. He made sure it was kept safe and appropriately on a mattress off the floor to prevent any offence to Muslims.

It is likely that the motive behind John's arrest stems from the fact that he has prayed for many sick and "demon-possessed people," including Muslims, whom God healed through his prayers 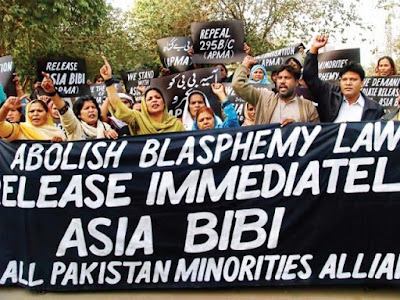