Walmart: Devil is OK, but not Israeli soldier costume

- October 29, 2015
Walmart has decided Jewish kids can be satan or devils for Halloween, but not Israeli Defense Forces soldiers.

The company sided with anti-Israel activists who complained IDF costumes were unacceptable. “The costumes are very problematic, and offensive to many people. The Israeli forces are responsible for the continued death and occupation of the Palestinian people. Such a symbol of fear, violence and a long history of dispossession should not be used for entertainment purposes,” Samer Khalaf, the committee president for the American-Arab Anti-Discrimination Committee, said in a statement Wednesday.

The costume originally sold for $27.44 before being pulled from Walmart’s online store. Critics also took issue with an “Arab Sheik” option with a hook-nose. 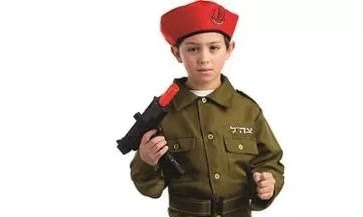 Scientist are now worried that the Super Volcano at Yellowstone National Park could erupt at any moment and wipe out the human race. Researchers at ASU have concluded that the eruption could happen sooner than expected by results of mineral measurement. A study in 2011 found that the magma reservoir has risen more than 10 inches in seven years. Earthquake swarms have continued to increase in the area to further alarm scientists.
Read more

Empty Shelves 2020 - Food Shortage   Did you notice what happened in the USA during the coronavirus lockdown? SHELVES EMPTIED ALMOST INSTANTLY!  Notice something else? The store shelves are not stocked like they were  pre-pandemic level. I think we all figured out that the United States is not prepared for a mass food shortage. Even now, supply chains are disrupted with no return to normal in sight Do you think the government will take care of you? I hope you know now that we could not even get toilet paper on a consistent basis much less food.  Prices have skyrocketed for all food. Ground beef has went from $2 a pound to over $8 a pound. Cans goods, dry goods and drinks - ALL SKYROCKETING OUT OF CONTROL! What does the future look like? All experts are saying that the world is never going back to normal . If the United States, the light for the world, cannot help its citizens in a crisis the world is teetering on the edge of a global food crisis. There is a warning that 295 MILLION peo
Read more

image - turbosquid Health officials have implemented emergency measures in Kerala after the more than 40 people were infected with the Nipah virus, which causes flu-like symptoms leading to an agonizing brain-swelling condition known as encephalitis, according to Sky News. There is no vaccine for Nipah, which has a mortality rate of 70 percent, and no treatment beyond supportive care to make patients comfortable. The virus is listed alongside Ebola and Zika as one of eight priority diseases the World Health Organization believes could cause a global epidemic. READ FULL STORY
Read more