The Palestinian wave of terror continued Wednesday, with a terrorist stabbing a woman 60 years of age near Jerusalem’s Central Bus Station as she was boarding a bus.

The Israeli bus driver made sure the woman, who was severely injured, could board the bus before he quickly shut the doors to lock out the terrorist. The assailant, identified as Ahmed Shaaban, a 23-year-old resident of the Ras el-Amud neighborhood in Jerusalem, was shot and neutralized by a special forces police officer who was near the scene and noticed the knife-wielding young man.

Shaaban was released from prison earlier this month after serving a three-year sentence for terrorism-related activities.

Earlier Wednesday, there was a second terrorist incident in Jerusalem when a Palestinian sought to stab people near the Damascus Gate, a main entrance to Jerusalem’s Old City. A Border Police unit approached the youth, who looked suspicious, and he drew out his knife to attack the police officers, who in turn drew their weapons and shot the suspect dead. The attempted stabber was later identified as Bassel Sader, 19, a resident of Hebron in the West Bank

Also Wednesday, a 19-year-old Palestinian who attempted to stab Israeli civilians and police at the Damascus Gate Plaza in Jerusalem’s Old City neighborhood was shot and killed by police officers. 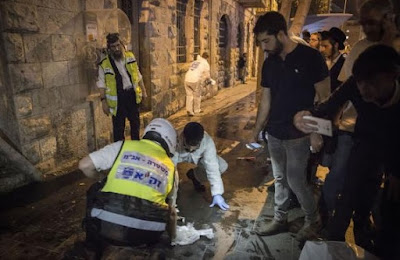