North Korea has once again threatened to use nuclear force on the USA mainland and South Korea
North Korea released the following statement today: (full statement available at KCNA)

The U.S. imperialists (USA...) finally commenced military actions to violate the sovereignty of the DPRK and destroy its right to existence by force.

That is joint military rehearsal Key Resolve and Foal Eagle 16 joint military exercises that started Monday. This time they even cast away the spurious mask of "annual" and "defensive" which they have so far oft-repeated to conduct them as the most undisguised, most vicious and the largest-ever nuclear war rehearsal for invading the DPRK.

The rehearsal cannot but be branded as the ferocious war racket that can never be tolerated by the army and people of the DPRK as it was started in the wake of the fabrication of the illegal "resolution" of the UN Security Council against the DPRK in a bid to politically isolate it and strangle its economy.

It is something unprecedented that almost all three strategic nuclear strike means of the U.S. were deployed throughout south Korea one by one and the large special operational groups and surprise strike landing teams of the three services of the U.S. forces which earned an ill fame as a group of murderers have been engaged in the exercises.

...... The situation has reached the phase that can no longer be put under control. All facts clearly prove that the U.S. imperialists and the puppet forces have escalated the situation under the pretext of the DPRK's H-bomb test for self-defence and its satellite launch for peaceful purposes, with an aim to ignite a war against it

.... It is the final decision made by the service personnel and people of the DPRK that they should deal with the (U.S.A.) and the (South Korea) by force of arms only as they are bereft of any common knowledge and reason. ..... If the enemy forces' war racket against the DPRK being recklessly staged in south Korea, a dangerous nuclear arsenal, is overlooked, the Korean nation will neither be safe nor will the world be able to escape from the disaster of a nuclear war. " 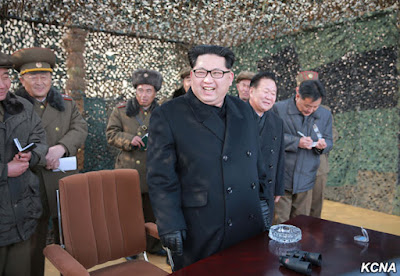