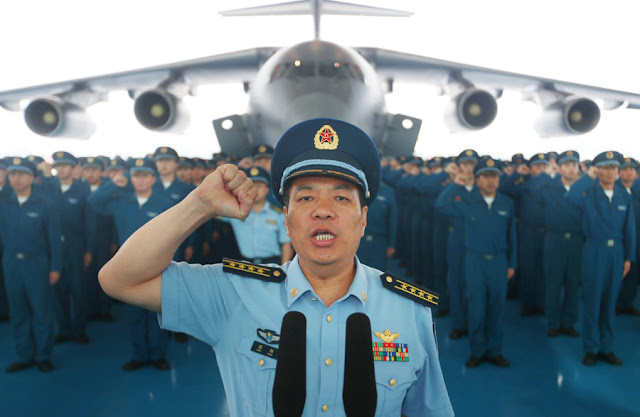 China's news agency Xingua reported that Fan Changlong, vice chairman of China’s Central Military Commission "urges Chinese troops to get prepared for combat by improving planning, equipment and logistical support in order" to be ready to "win the war."

Fan made the comments in recent inspection tour of China’s Southern Theater Command. The warning comes days after China officially warned the US that its patrols in the South China Sea - which despite last week's decision by the Hague tribunal - deems as its own, could end in "disaster."

CPC Central Committee, Central Military Commission Vice-Chairman Fan Changlong emphasized recently in the southern theater forces research, to earnestly study and implement President Xi major strategic thinking and decision-making important instructions, adhere to the party's absolute leadership over the army, firmly grasp the Party in the new situation strong military target under the full implementation of the political army reform and a strong army, in army stepping up preparations for military struggle, strengthen the combat of military training, and constantly improve deterrence and combat capability, and resolutely obey the Central military Commission and President Xi command, and resolutely safeguard national sovereignty, security and development interests. Central Military Commission, commander of the Air Force Ma Xiaotian, CMC member and rocket forces commander Wei Feng and were about to participate in research. Fan Changlong stressed the need to deeply understand the complexity of the grim situation facing the security, stepping up preparations for military struggle of the work to ensure that the order, be able to have to go win the war. Focus on the difficult situation to deal with complex, targeted research warfare countermeasures, revision and improvement plan program, deepen all aspects of preparation of personnel, equipment, security and so on. Depth specializing in refining and confrontational drills used in efforts to build a critical moment, to play a key role in the "dagger" forces, improve military and emergency response capabilities assault capability. Strengthen combat duty, well-organized air and sea patrol, firmly secure disposal of various contingencies, to ensure air safety side of the sea. We must resolutely implement the Party Central Committee and President Xi instructions requirements, support local flood prevention work to do, to protect people's lives and property, to restore normal production and life order to contribute

Scientist are now worried that the Super Volcano at Yellowstone National Park could erupt at any moment and wipe out the human race.

Researchers at ASU have concluded that the eruption could happen sooner than expected by results of mineral measurement. A study in 2011 found that the magma reservoir has risen more than 10 inches in seven years.

Earthquake swarms have continued to increase in the area to further alarm scientists.

Health officials have implemented emergency measures in Kerala after the more than 40 people were infected with the Nipah virus, which causes flu-like symptoms leading to an agonizing brain-swelling condition known as encephalitis, according to Sky News.

There is no vaccine for Nipah, which has a mortality rate of 70 percent, and no treatment beyond supportive care to make patients comfortable. The virus is listed alongside Ebola and Zika as one of eight priority diseases the World Health Organization believes could cause a global epidemic.

Did you notice what happened in the USA during the coronavirus lockdown? SHELVES EMPTIED ALMOST INSTANTLY!  Notice something else? The store shelves are not stocked like they were  pre-pandemic level. I think we all figured out that the United States is not prepared for a mass food shortage. Even now, supply chains are disrupted with no return to normal in sightDo you think the government will take care of you? I hope you know now that we could not even get toilet paper on a consistent basis much less food. Prices have skyrocketed for all food. Ground beef has went from $2 a pound to over $8 a pound. Cans goods, dry goods and drinks - ALL SKYROCKETING OUT OF CONTROL!What does the future look like? All experts are saying that the world is never going back to normal. If the United States, the light for the world, cannot help its citizens in a crisis the world is teetering on the edge of a global food crisis. There is a warning that 295 MILLION people could face food shortages! So we kno…
Read more